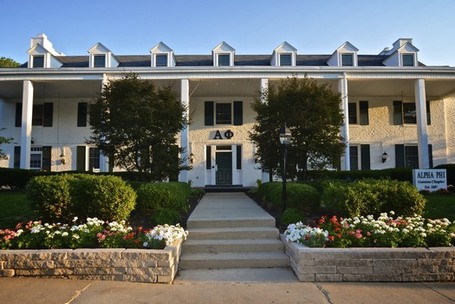 Gamma has a long and proud history, going back to 1887 when 6 members were initiated, forming the fraternity’s fourth chapter. Members from the Beta chapter at Northwestern University had come to Greencastle to ‘meet the girls and pass judgment upon them.’ The Betas found that the proposed members met all expectations and forthwith initiated them at the home of Florence Hays, just outside the city limits of Greencastle.

The budding women’s chapter had received much support and encouragement from the Delta Upsilon men’s fraternity that had just been established two months earlier.
Five of the six new members of Gamma were from Greencastle, so housing was not an issue. However, as membership grew, the need for a headquarters became more important. In 1893 a house was rented for both meetings and housing.

In 1920, thanks to the generosity of four alumnae, Gamma chapter was able to purchase ‘a beautiful colonial house set in the midst of lovely gardens on East Seminary Street.’ Gamma was the first sorority to own a chapter house on the DePauw campus. (This home still stands, now as a multi-family house, at 640 East Seminary Street)

In the spring of 1939 Gamma moved into the ‘big white house’ at 202 East Hanna Street, a home designed especially for this purpose, that has served the chapter well ever since.

Sisters of Alpha Phi share a commitment to excellence and a strong desire to help one another and their communities.  Alpha Phis are leaders, scholars, contributors and lifetime members of a sisterhood that values these traits.
Powered by